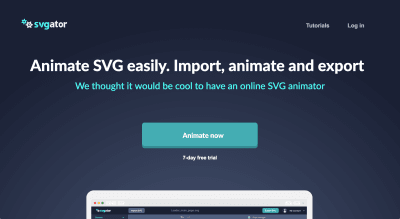 (This article is kindly sponsored by SVGator.) Animated SVG files have become very popular. They are entirely scalable (because they are vectors), small and 100% code-based, which allows for so many transformations and tweaks. This, however, comes at a price: the steep learning curve for complete beginners.

SVGator pledges to solve this problem, making it really easy for anyone to make simple animations using a familiar interface. It’s a web-based animation app that lets you import, animate and export SVG animations, and it eliminates the need for beginners to learn to code. We tried it, and we really loved it.

Head over to https://www.svgator.com to start using the app. The sign-up process is pretty straightforward (figures 1 to 3): Click “Animate now”, then “Create account”, fill in your details, and you’re good to go.

You’ll be taken directly to the sample “Stopwatch” project, which let’s you explore SVGator’s features. If you can’t find your way within the app, there’s a neat tutorial (figure 4) that will guide you in how to start using it: Import a static SVG, add elements to the timeline, and add animators to elements and keyframes to animate the four currently available properties (scale, opacity, position and rotation).

If you’ve ever used an animation app, the user interface of SVGator should feel pretty familiar to you, and everything will probably feel in its right place. You only add elements that you’ll animate, which keeps the timeline clean and easy to scan.

The starter animated clock project does a great job of introducing you to SVGator. You can always come back to it and use it as a reference.

Now that we have the basics out of the way, let’s jump into making our own animations!

Check out this simple envelope icon we designed in Sketch (figure 5). It starts off closed, then it opens, and a letter pops up, followed by its contents. Then, the letter jumps out of the envelope and scales up to show the green checkbox.

Here’s a summary of the process:

Part 1: Create And Export An Icon From Sketch

Make A Simple Storyboard To Save Time

Storyboarding lets you visualize all of your transitions before you actually import them in SVGator. It also makes it easy to test transformations before committing to making the whole animation. It often happens that you’ll discover an issue with the illustration that should have been done differently in Sketch, and so you have to go back in and change it. Then, you need to reimport the whole file in SVGator and start with the animations from scratch. Because you wouldn’t want to do this every single time, storyboarding helps by forcing you to plan things in advance.

For example, I initially planned for the envelope to stay more towards the bottom of the screen, but after importing it to SVGator and playing with the closing and opening, it was clear that it needs to stay in the middle while closed and slightly down when opened — a detail that was omitted in the static images.

Tip: Check out the storyboard in the Sketch file → Artboard “storyboard”.

If you name your layers in Sketch, it will work as expected, and all names you’ve assigned in Sketch will be transferred to your project in SVGator. But if you use SVGO Compressor or a similar plugin to make the SVG files smaller, the names will disappear, and SVGator will replace them with ones based on the HTML tag, and you’ll end up with something similar to what’s shown in figure 7.

Tip: If you’re already using SVGO Compressor for other SVGs and don’t want to disable it, just drag and drop the file from the export preview area in Sketch to your desired location (figure 8). This will circumvent SVGO Compressor and export the SVG as is!

Using groups is great, too, because the app recognizes them, and you can even simultaneously animate a layer and its parent group, adding a bit more complexity.

We haven’t encountered any limitation on the number of layers used, but then again, our icon is pretty simple.

Preparing The Icon for Animation

Now that we have the idea in a storyboard and we’ve prepared the master file, let’s export it in a way that we can make sense of in SVGator. Be sure to double-check the layer hierarchy. Think of how a certain layer will interact with another and where it should be placed in the Layers panel. In figure 9, you’ll see we’ve selected “top_opened” — that’s the opened top flap of the envelope. It should stand behind the white sheet of paper. And vice versa, “top_closed” is the closed flap of the envelope, and it should stay on top of everything; that’s why it’s the first layer in our “content” group.

Tip: You might be wondering why the whole top flap is made of two layers. It’s because we can’t rotate shapes or really transform them in 3D space using SVGator. We’re emulating this by squashing the first layer and then stretching the second one, thus creating the illusion of a 3D transformation.

Taking all of this into account, we can now export the icon. It’s practically a single SVG that contains all of the elements we’ll need, stacked on top of each other in a useful way.

Tip: Be sure to have all elements marked visible (not hidden) before exporting. You can look at the file we’ve used as the export in the Sketch file → Artboard “export”.

If you’ve done everything correctly, you should see something like figure 12 and the short clip below (clip 1): all layers stacked on top of each other and ready for use. If, by chance, you don’t see everything, go back into Sketch and double-check that all layers are visible.

Animating The Opening Of The Envelope

We’ll start by importing some elements in the timeline. The way SVGator functions is that you’ll start with an empty timeline. You choose which elements to add from the “Elements” dropdown. You’ll have to manually check them using the eye icon to see which is the layer you’re looking for. Alternatively, you can click directly on the element on the screen, which will do the same.

We’re going to work on steps 1 and 2 from the storyboard, specifically on the flap’s opening. Let’s disable the layers we don’t need for now; we’ll come back to them later (see clip 1 to see how to do that). We should be left with just the basic envelope, which means you should disable the following layers: “sheet_top_content”, “sheet_top_bgr” and “sheet_bottom_bgr”.

Then, click on “top_opened”, and click the plus icon to the left, or double-click the element to add it to the timeline. Do the same for “top_closed”. Now you should have both layers in the timeline (figure 13).

Tip: If you want to fast-forward through the whole process, check out clip 2 (the actions might not be in the same order as described below).

Tip: Easing will make the motion look more natural, and because we’re designing an animation that emulates the movement of a single element, it’s natural to ease-in the beginning and ease-out the ending of the animation.

Now, let’s deal with the “top_opened” part, the ending of the animation. As we noted earlier, we’re doing this in two parts to emulate a 3D opening of the flap.

Looks cool, but now the whole envelope needs to move down so that it fits within the circled background. Find a group called just “g” in the Elements, and add a Position animator to it. Add a position keyframe to 0.2s and then to 0.8s. Change the 0.8s value to 0 35. Add Ease-in-out for a smooth animation. And that’s it! We have successfully animated the envelope open and even made it move a bit downwards.

Adding Complexity: The Letter Pops Up

Opening envelope is neat, but we can make it more interesting by introducing a sheet of paper. To do so, we’ll need to reveal the sheet layer, which we called “sheet_bottom_bgr”.

Tip: If you prefer to watch this in a video, check out clip 3 below.

Even More Complexity: Animating the Scaling of the Letter

To take it further, let’s animate the letter popping out of the envelope, and let’s reveal some lines of text “written” in the letter. To do that, we’ll have to modify the previous animation a bit. (If you want to fast-forward, you could just watch the screencast and repeat it.)

This is the front sheet’s movement, and it should look like what you see in figure 17.

Now let’s fix the back sheet. It should disappear once the front shows up, and the front sheet should only appear after that.

Let’s make the respective changes to the front sheet, too:

You should see something like figure 18 below. We can spot two problems here:

Let’s fix the first issue. Let’s hide the content and the checkbox and show it after the front sheet has appeared.

The second issue is a glitch that happens because our back sheet disappears too early.

To make it more appealing, let’s scale the front sheet and content when it pops out of the envelope. We could scale the whole “top_sheet_content”, but that might result in some misalignments in some browsers. It’s best to scale each of its child layers on its own.

Tip: It’s OK to scale content in SVG because it’s all vector-based, so you won’t lose any quality.

All good, but the whole animation needs to loop back to the first frame. That’s because we want to reuse it. Our idea is to have the front sheet slide down and the envelope close and turn to its original position.

Congratulations! We have animated the whole icon. Here’s what it should look like (figure 22):

Part 3: Implementing The Exported Animation In A Real Web Environment

Let’s place the icon in a real environment. We’ve coded a simple newsletter form and included the icon there. You can export the icon from SVGator by clicking “Export SVG”.

It works by having two SVG icons: The first one is a static one with just the first frame of the animation included, and the second is the animated one. You can find the static icon in the Sketch file → Artboard “export static”. We’ve included it as an inline SVG element within the code. We’ve also included the animated SVG inline, but hidden it by default. You can check out the code in the download. When “Subscribe” receives a click, we hide the static SVG and show the animated one, which automatically starts.

A minor adjustment we made in the static SVG was to replace this line:

This will remove the gray rectangle that is displayed incorrectly on top of all elements.

This example also shows just how good SVGs are in responsive design: If you make the window smaller, the layout will rearrange, and the icon will enlarge with no loss of quality whatsoever.

Tip: When we made the icon smaller, we found that it takes too much time for the sheet to get out of the canvas, so we had to go back and edit that particular timing a bit to make it shorter. We moved the last Position keyframes of “sheet_top_bgr” and “sheet_top_content” to 3.2s to make the movement faster.

If you want, you can tweak the animation even after you’ve exported it, but it’s much easier to do this in SVGator, where you’ll have the convenient UI.

We’re pretty excited by tools such as SVGator, which really speed up the process when you’re making simple SVG animations. It’s easy to use and you can get a great-looking animation in no time.

A special thanks to Boyan Kostov for preparing this article — we appreciate your time and effort!