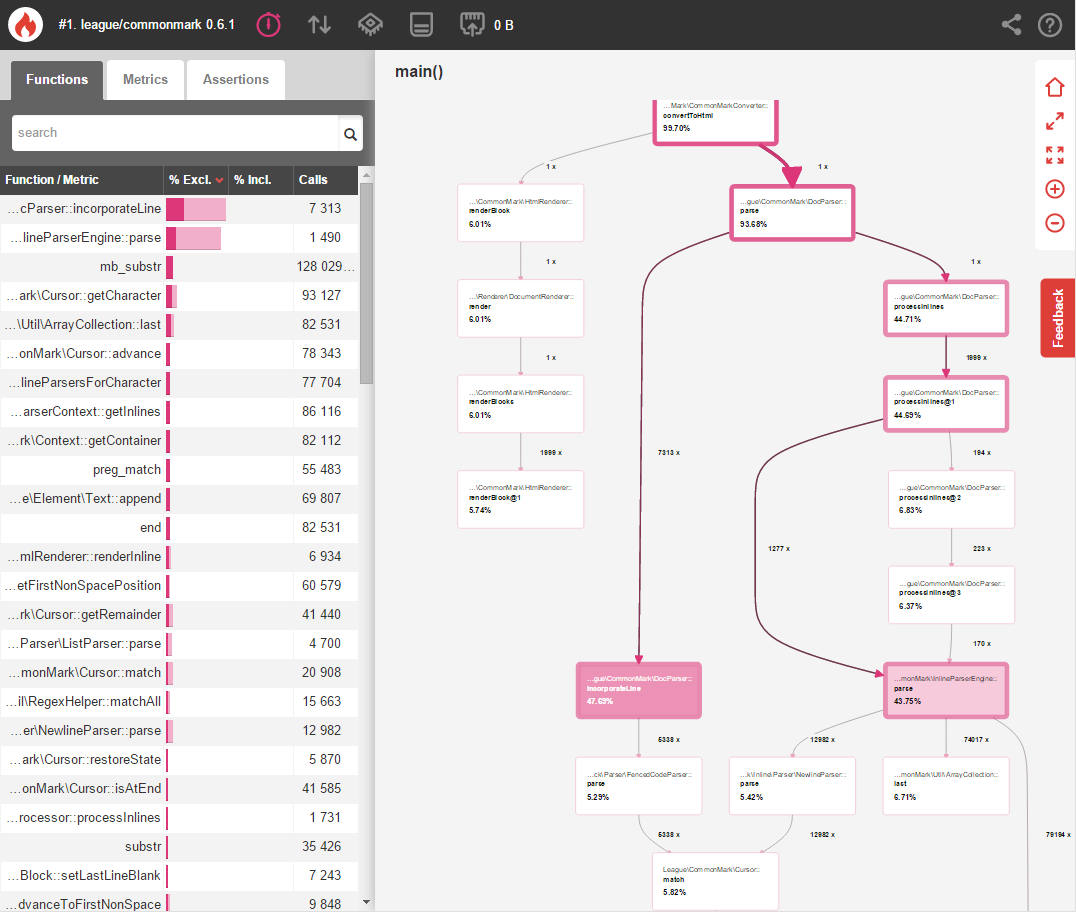 As you may know, I am the author and maintainer of the PHP League‘s CommonMark Markdown parser. This project has three primary goals:

This last goal is perhaps the most challenging, especially from a performance perspective. Other popular Markdown parsers are built using single classes with massive regex functions. As you can see from this benchmark, it makes them lightning fast:

Unfortunately, because of the tightly-coupled design and overall architecture, it’s difficult (if not impossible) to extend these parsers with custom logic.

For the League’s CommonMark parser, we chose to prioritize extensibility over performance. This led to a decoupled object-oriented design which users can easily customize. This has enabled others to build their own integrations, extensions, and other custom projects.

The library’s performance is still decent — the end user probably can’t differentiate between 42ms and 2ms (you should be caching your rendered Markdown anyway). Nevertheless, we still wanted to optimize our parser as much as possible without compromising our primary goals. This blog post explains how we used Blackfire to do just that.

Blackfire is a fantastic tool from the folks at SensioLabs. You simply attach it to any web or CLI request and get this awesome, easy-to-digest performance trace of your application’s request. In this post, we’ll be examining how Blackfire was used to identify and optimize two performance issues found in version 0.6.1 of the league/commonmark library.

Let’s start by profiling the time it takes league/commonmark to parse the contents of the CommonMark spec document:

Later on we’ll compare this benchmark to our changes in order to measure the performance improvements.

Quick side-note: Blackfire adds overhead while profiling things, so the execution times will always be much higher than usual. Focus on the relative percentage changes instead of the absolute “wall clock” times.

Looking at our initial benchmark, you can easily see that inline parsing with InlineParserEngine::parse() accounts for a whopping 43.75% of the execution time. Clicking this method reveals more information about why this happens:

Here we see that InlineParserEngine::parse() is calling Cursor::getCharacter() 79,194 times — once for every single character in the Markdown text. Here’s a partial (slightly-modified) excerpt of this method from 0.6.1:

Blackfire tells us that parse() is spending over 17% of its time checking every. single. character. one. at. a. time. But most of these 79,194 characters are plain text which don’t need special handling! Let’s optimize this.

Instead of adding a single character at the end of our loop, let’s use a regex to capture as many non-special characters as we can:

Once this change was made, I re-profiled the library using Blackfire:

Okay, things are looking a little better. But let’s actually compare the two benchmarks using Blackfire’s comparison tool to get a clearer picture of what changed:

This single change resulted in 48,118 fewer calls to that Cursor::getCharacter() method and an 11% overall performance boost! This is certainly helpful, but we can optimize inline parsing even further.