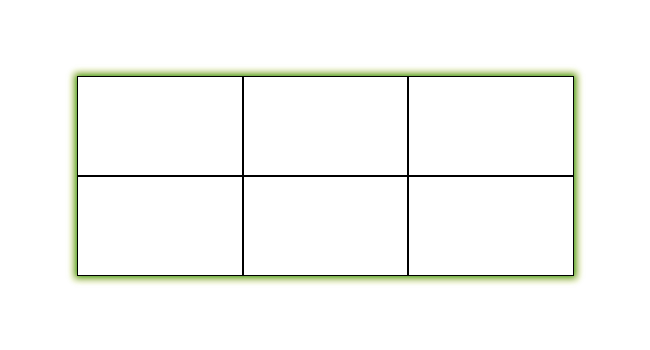 This is the third and final part in a three-part series about using CSS grid safely in Internet Explorer 11 (IE11) without going insane.

In Part 1, I covered some of the common misconceptions that people have about IE11’s native CSS grid implementation. In Part 2, I showed the world how easy it actually is to write IE-friendly CSS grid code.

How to make a fake grid with cell gaps

I’ll use this basic HTML as an example:

The first thing that we need to do in the CSS is make sure that all of the boxes are being sized based on border-box rather than content-box. The best way to do that is using the box-sizing: border-box inheritance technique:

That will be applied globally. If you are working on an an existing project that doesn’t have box-sizing set to border-box, then change html in the snippet to a selector that targets the element you want to turn into a grid.

Next, you will need to turn on some flexbox settings:

Now, set up your column widths. We’ll make ourselves a simple three-column grid:

The calc() method allows the column widths to be changed a bit more easily. You state how many columns you want and the browser does the math for you. This is especially handy for when you need a larger number of columns, like 7 or 8. The browser support for calc() is strong but not as strong as a raw percentage value which has been supported by browsers since the dawn of CSS.

The percentage method has slightly better browser support and can be a bit more stable in IE. If you don’t need to support Opera Mini, I would still recommend going with the calc() method first. Test in IE, and if the layout breaks, first try using 99.999% instead of 100% in the calc function (calc(99.999% / 3)). If that doesn’t work, then try switching to the percentage method. I will be using the calc() method in all of my examples. Note that if you are using a CSS pre-processor like SCSS, you can have the best of both worlds by getting the pre-processor to do the math for you. This comes at the cost of not being as easily able to edit or review the column counts in browser dev tools.

Let’s give the grid cells some height and an inner box-shadow so that we can see what’s going on. I’m not adding border — I’ll be using that later. 😉

You should now have something that looks like this:

That’s boring though, right? Everyone knows how to do that. Where are these grid gaps I keep talking about? I want my gaps!!!

Here’s where we get to the interesting part. Since we set box-sizing to border-box, the 33.33% width now includes the border. What this means is that we can start safely mixing fixed and percentage based units! 😃

This results in something that looks like a grid with equal spacing everywhere:

To help give you a better idea of what is going on, take a look at the following image:

That might be the look that you actually want. On the other hand, that isn’t what a grid with a grid-gap setting looks like. That is why we have another step.

In order to get the grid pressing hard up against the edges of its container, we need a bit of help from negative margins and overflow: hidden:

We need to apply overflow: hidden to prevent this from happening:

Applying the negative margin and overflow: hidden will get us to this beautiful recreation of basic grid-gap functionality:

The top and left padding on the grid is actually optional. You can opt to leave off the padding and change the margin value as shown below if you prefer:

But, hold on! The job isn’t quite over yet. Take a look at what happens if we add a background color to one of the grid cells:

Not exactly what we want, so there is one more step.

In order to prevent the grid cell background from bleeding into our fake grid-gap, we need to add background-clip: padding-box to it.

Now we have this:

Most of the time, grids need to be able to change the number of columns that they have as they grow and shrink. Using other methods can be a massive pain. You might have to calculate a bunch of nth-childs so you can remove the right margin or whatever. With this method, you only have to change a single value! 😃

Here’s how it looks when we put it all together:

Ain’t nobody got time for dat!

That’s a lot of work compared to what modern Grid can do in just three lines of CSS! To make the task easier, I created an SCSS-powered mixin I call Gutter Grid. Once Gutter Grid is installed in the project, you can quickly create a three-column grid with 20px gaps using the following SCSS code:

You can write it even shorter like this if that feels too verbose:

Gutter Grid comes pre-built with a few sets of breakpoints so you may not have to write any breakpoints at all if your grid spans the whole page! If you do need custom breakpoints, though, then Gutter Grid lets you easily customize them like so:

As you might have noticed in the example, Gutter Grid also supports the same media query syntax that this thing called mq-scss uses. If you are wondering what that is, well, it’s a Sass mixin that I created that makes writing and managing media queries about a million times easier. Using mq-scss statements to dictate column count allows for very fine control over when the column count changes.

Adding shadows to the grid cells

Since we are working with shadows now, I’ll take the box shadow off of the example image. Our starting grid looks like this now:

If we try to add an outer box-shadow to each grid cell right now… well it doesn’t look so good:

In order to create nice shadows, we need to add an extra div inside each grid cell. You can’t really use ::before or ::after for this since they are unable to contain HTML content inside of them.

Let’s see what we get if we try adding box shadows to the inner elements:

That’s much nicer, but it is still not quite there yet. The hidden overflow that we are using to prevent the Chrome bug is getting in the way.

So, we need to allow overflow but still avoid this Chrome bug. The only other safe way I’ve found to do that is with padding. By adding 1px of padding to the top and bottom of the outer grid wrapper element, it will fix the Chrome bug.

This comes at the expense of having an extra 1px of space at the top and bottom of the grid. The image below demonstrates how this ends up looking. The shadows have been lightened to show the 1px gap more clearly.

Note: You can avoid the 1px of top padding by opting not to include the top padding gap value on the grid element. The 1px of bottom padding can’t be avoided though.

A border width applied to the outer grid wrapper will also work, so technically I didn’t need to apply the padding to the example above. Most of the time, if we are applying a shadow to grid cells, then we probably don’t want to see a border wrapped around them. The above example was more demonstrating how minor the padding is.

This is what the grid looks like without the outer border:

Here is a Pen showing the final product:

See the Pen Fake grid with shadows by Daniel Tonon (@daniel-tonon) on CodePen.

Let’s cover how to add shadows on Gutter Grid cells. You can use the same HTML structure we used in the previous example.

Now, apply this SCSS to create a three-column grid that has a 20px gutter:

This new $inners: true property tells Gutter Grid that the grid cells each have a single child element that needs to take up the full height and width of its parent grid cell.

Instead of using overflow: hidden, use 1px of bottom padding on the wrapper element.

Gutter Grid will not output a top outer gutter if it doesn’t need to. This helps avoid issues around the Chrome negative margin bug. After all, if there is no top outer gutter to negate with a faulty negative margin, then there is no bug to worry about. The bottom outer gutter is still a problem, though, and that is why we need the 1px of bottom padding. This 1px of bottom padding tends to be barely noticeable (if at all), so don’t worry about it too much.

Now, add your shadows and you’ve got yourself a Gutter Grid with shadow cells!

I’ve only scraped the surface of what Gutter Grid can do in this article. Make sure to read the full documentation to learn what else it’s capable of.

We come to the end of our IE grid adventure

I hope you have enjoyed this foray into the world of IE and CSS grid. Make sure to read through Part 1 and Part 2 if you haven’t already. Having read all three articles, you will now be fully equipped to make some truly stunning layouts that look just as good in IE as they do in modern browsers.

If you ever see anyone complaining about not being able to use CSS grid because of IE, you know what to do. Playfully slap them on the head for being so foolish and send them here to get the truth.

Now go forth, my friends, and build some grids! 😃🎉

The post CSS Grid in IE: Faking an Auto-Placement Grid with Gaps appeared first on CSS-Tricks.