Next.js gives you the best developer experience with all the features you need for production. It provides a straightforward solution to build your API using Next.js API routes.

In this guide, we will be first learning what are API Routes, and then create a GraphQL server that retrieves the data from the Github API using the Next.js API Routes.

To get the most out of this tutorial, you need at least a basic understanding of GraphQL. Knowledge of Apollo Server would help but is not compulsory. This tutorial would benefit those who want to extend their React or Next.js skills to the server-side and be able to build as well their first full-stack app with Next.js and GraphQL.

What Are Next.js API Routes?

Next.js is a framework that enables rendering React apps on the client or/and the server. Since version 9, Next.js can now be used to build APIs with Node.js, Express, GrapQL, and so on. Next.js uses the file-system to treat files inside the folder pages/api as API endpoints. Meaning that, now, you will be able to access your API endpoint on the URL http://localhost:3000/api/your-file-name.

If you came from React and never used Next.js, this might be confusing because Next.js is a React framework. And as we already know, React is used to build front-end apps. So why use Next.js for backend apps and APIs?

Well, Next.js can both be used on the client and server sides because it is built with React, Node.js, Babel, and Webpack, and obviously, it should be usable on the server as well. Next.js relies on the server to enable API Routes and lets you use your favourite backend language even if it’s technically a React framework. Hopefully, you get it right.

So far, we have learned what API Routes are. However, the real question remains: why use Next.js to build a GraphQL Server? Why not use GraphQL or Node.js to do so? So, let’s compare Next.js API Routes to existing solutions for building APIs in the next section.

GraphQL and REST are great ways of building APIs. They are super popular and used by almost every developer nowadays. So, why use a React framework to build APIs? Well, the quick answer is that Next.js API Routes are on a different purpose because API Routes allows you to extend your Next.js App by adding a backend to it.

There are better solutions for building APIs such as Node.js, Express, GraphQL, and so on since they are focused on the backend. In my opinion, the API Routes should be coupled with a client-side to build up a full-stack app with Next.js. Using the API Routes to build a simple API is like underusing the power of Next.js because it’s a React framework that enables you to add a backend to it in no-time.

Consider the use-case when you need to add authentication to an existing Next App. Instead of building the auth part from scratch with Node.js or GraphQL, you can use API Routes to add authentication to your app, and it will still be available on the endpoint http://localhost:3000/api/your-file-name. The API Routes won’t increase your client-side bundle size because they are server-side only bundles.

However, Next.js API Routes are only accessible within the same-origin because API Routes do not specify Cross-Origin Resource Sharing (CORS) headers. You can still tweak the default behaviour by adding CORS to your API — but it’s an extra setup. If you generate your Next App statically using next export — you won’t be able to use API Routes within your app.

So far, we have learned when API Routes might be a better solution compared to the like. Now, let’s get hands dirty and start building our GraphQL Server.

To start a new app with Next.js, we will go for Create Next App. It’s also possible to set up manually a new app with Webpack. You are more than welcome to do so. That being said, open your command-line interface and run this command:

Next.js provides a starter template for API Routes. You can use it by executing the following command:

In this tutorial, we want to do everything from scratch, which is why we use Create Next App to start a new app and not the starter template.
Now, structure the project as follows:

As we said earlier, the api folder is where our API or server lives. Since we will be using GraphQL, we need a resolver and a schema to create a GraphQL server. The endpoint of the server will be accessible on the path /api/graphql, which is the entry point of the GraphQL server.

With this step forward, we can now create the GraphQL Schema for our server.

As a quick recap, a GraphQL schema defines the shape of your data graph.

Next, we need to install apollo-server-micro to use Apollo Server within Next.js.

Here, we define a User type that describes the shape of a Github user. It expects an id of type ID, a login, and an avatar_url of type String. Then, we use the type on the getUsers query that has to return an array of users. Next, we rely on the getUser query to fetch a single user. It needs to receive the name of the user in order to retrieve it.

With this GraphQL Schema created, we can now update the resolver file and create the functions to perform these queries above.

A GraphQL resolver is a set of functions that allows you to generate a response from a GraphQL query.

To request data from the Github API, we need to install the axios library. So, open your CLI and execute this command:

Or when using npm

Once the library is installed, let’s now add some meaningful code to the resolvers file.

As you can see here, we match the queries name defined earlier on the GraphQL Schema with the resolver functions. The getUsers function enables us to retrieve all users from the API and then return an array of users that needs to mirror the User type. Next, we use the getUser method to fetch a single user with the help of the name passed in as a parameter.

With this in place, we now have a GraphQL Schema and a GraphQL resolver — it’s time to combine them and build up the GraphQL Server.

A GraphQL server exposes your data as a GraphQL API. It gives clients apps the power to ask for exactly the data they need and nothing more.

Unlike regular Apollo Server, Next.js handles the start of the server for us since it relies on server-side rendering. That is why, here, we don’t have to start the GraphQL server on our own.

Great! With this step forward, we can now test if the GraphQL server works.

Once you browse to the root of the project, open it on the CLI, and then execute this command:

Now, visit http://localhost:3000/api/graphql and add the GraphQL query below to retrieve all users from Github.

Let’s check if we can fetch a single user with this query. 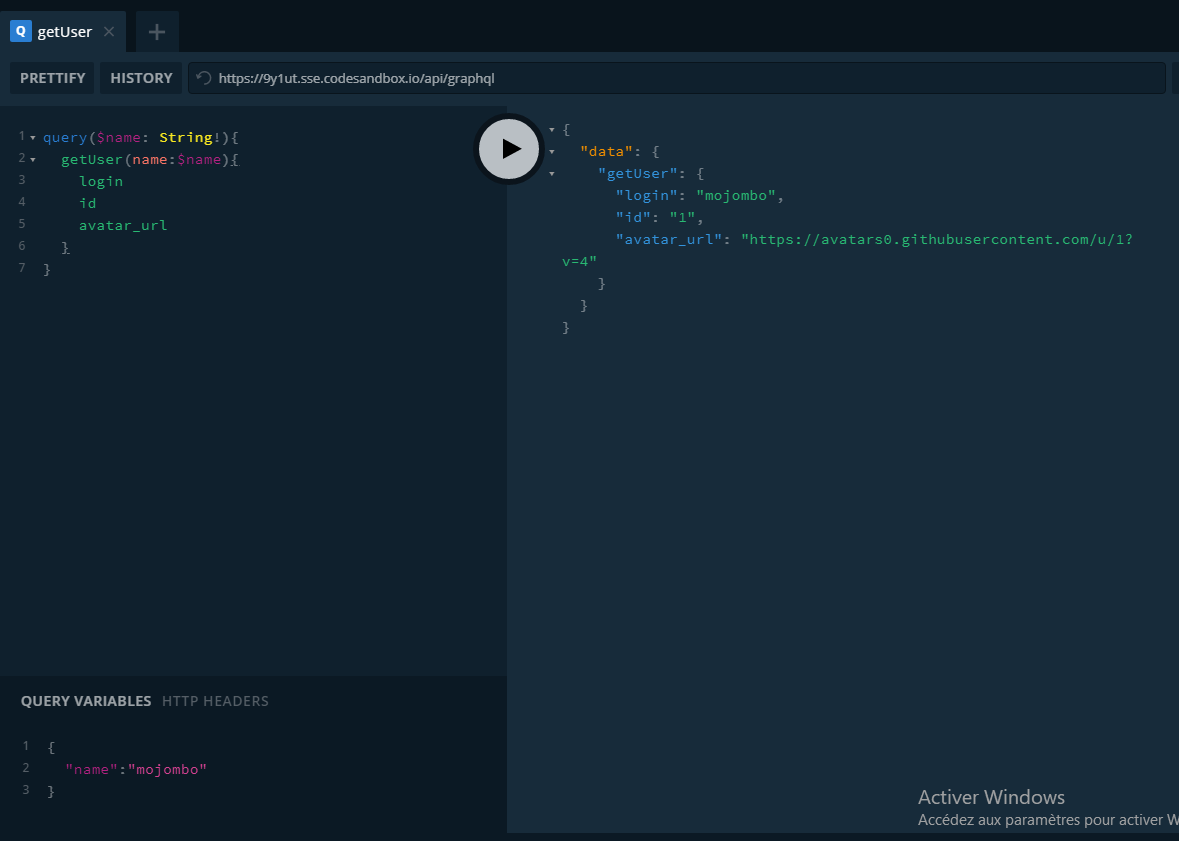 In this tutorial, we walked through Next.js API Routes by first explaining what they are and then build a GraphQL server with Next.js. The ability to add a backend to Next.js apps is a really nice feature. It allows us to extend our apps with a real backend. You can even go further and connect a database to build a complete API using API Routes. Next.js definitely makes it easier to build a full-stack app with the API Routes.

You can preview the finished project on CodeSandbox.

These useful resources will take you beyond the scope of this tutorial.