With React, building high performance web applications became very easy because of the framework’s re-rendering on the JavaScript virtual DOM, which helps it to quickly determine the changes needed when a user event is occurring. When writing complex application with React you will run into some performance issues, either because the application re-renders when it really doesn’t need to or because the states aren’t being handled properly, amongst other reasons.

What exactly is regarded a high performance application?

Performance is really important when dealing with a complex application or any application. In fact if your application doesn’t cover 60 frames per second (fps) which would give it like 16.7ms per frame, it is more than likely underperforming with regards to the standards. When your app is slow, it obviously takes more time to carry out instructions in good time, leading to a poor user experience.

Note: Optimizations are possible without React, true! However, as you develop more complicated views, maintaining and comparing virtual DOMs can become confusing and cause underperformance. Fortunately, React provides some tools to detect where performance issues exist and a means for avoiding them.

The concept of the react profiler is to collect timing information about components, the time rendered and committed in order to identify when each component actually rendered and at what speed. Basically to explain to you how fast or how slow your application is.

To explain this process, I will be using a simple question and answer application, rendering on Mozilla Quantum browser, with the React Performance Devtool.

The React Profiler environment is empty at first, you’d also notice a record button. click on it to start profiling.

Once you click on the record button, the profiler automatically collects performance information each time your application renders. To end this, click on the stop button

The dev tool provides a way for you to monitor the performance data .

React has two phases where it does work for our application:

When profiling, we’ll be looking closely at the commit phase to see where performance dips are.

The profiler runs for as long as you application renders, until you hit the stop button, you might have up to 30 commits depending on how many times your application renders. Say you want to know the commits that were faster than 500 milliseconds. The profiler offers a filtering option that can help you achieve this in these simple steps. 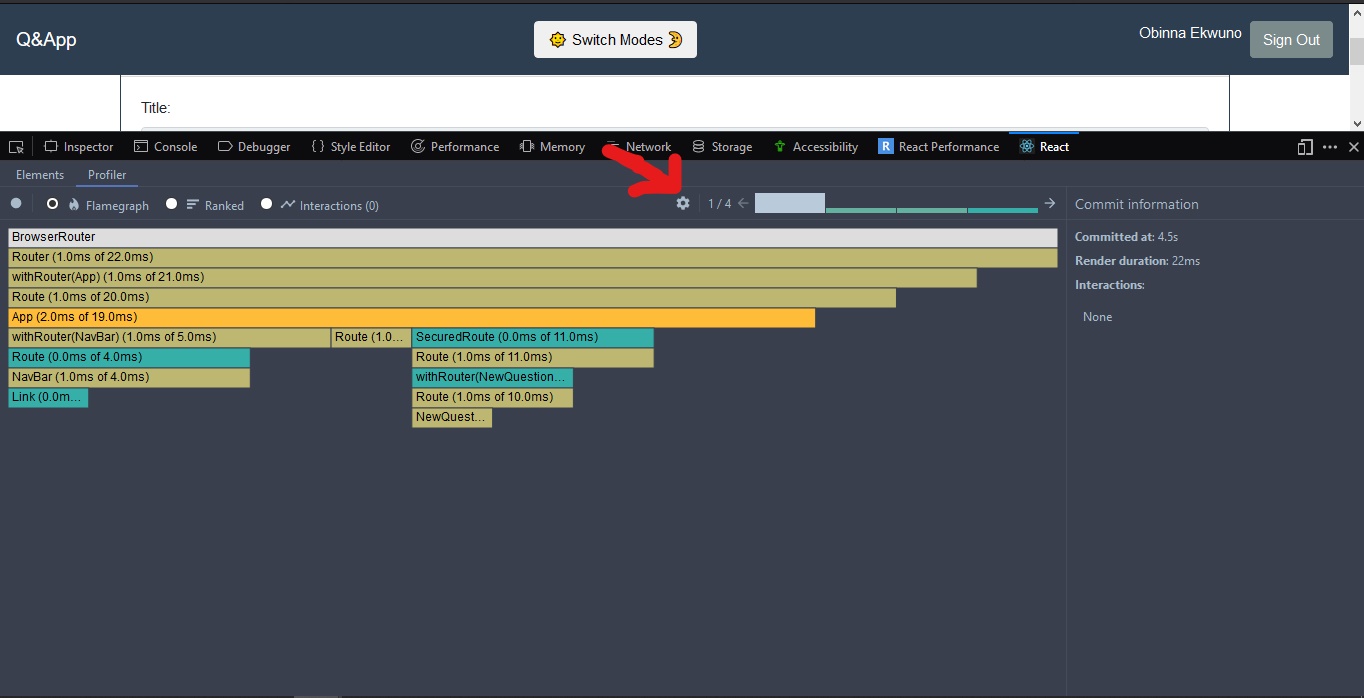 A drop down profiler setting shows, from where you can then ‘Hide commits below” a specific value, then veiw the changes on the upper right. 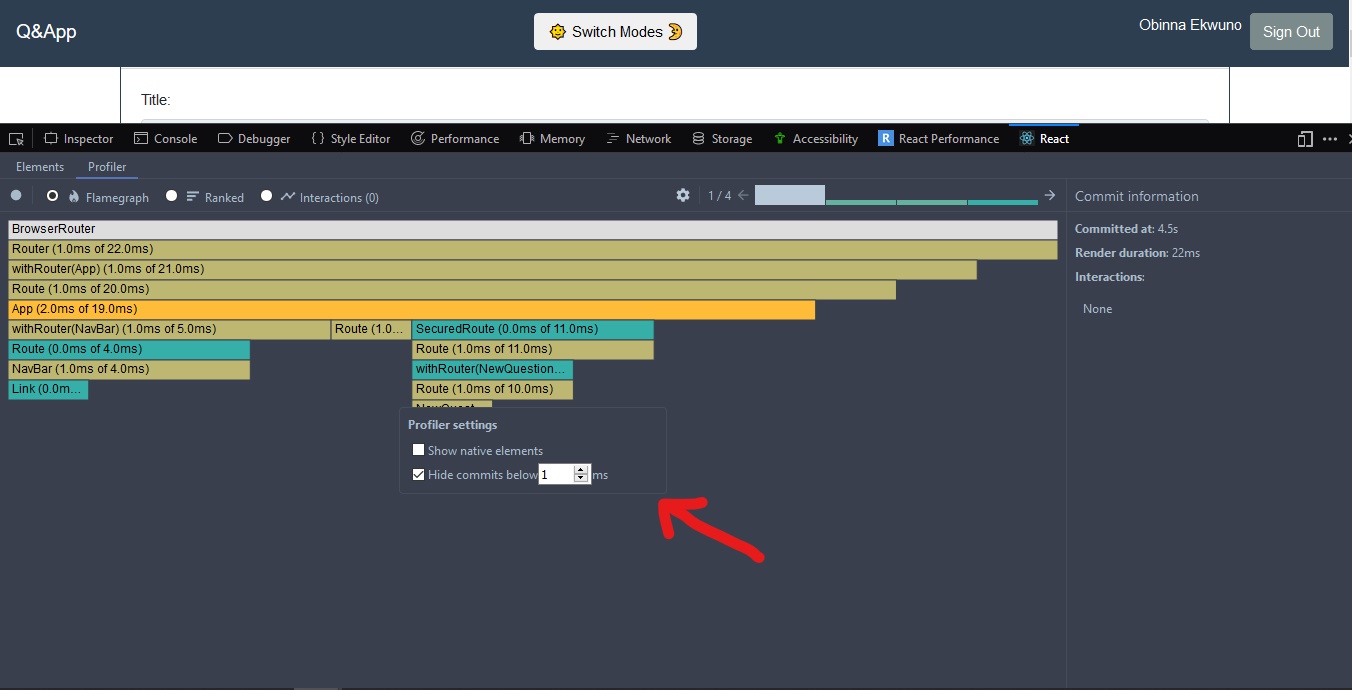 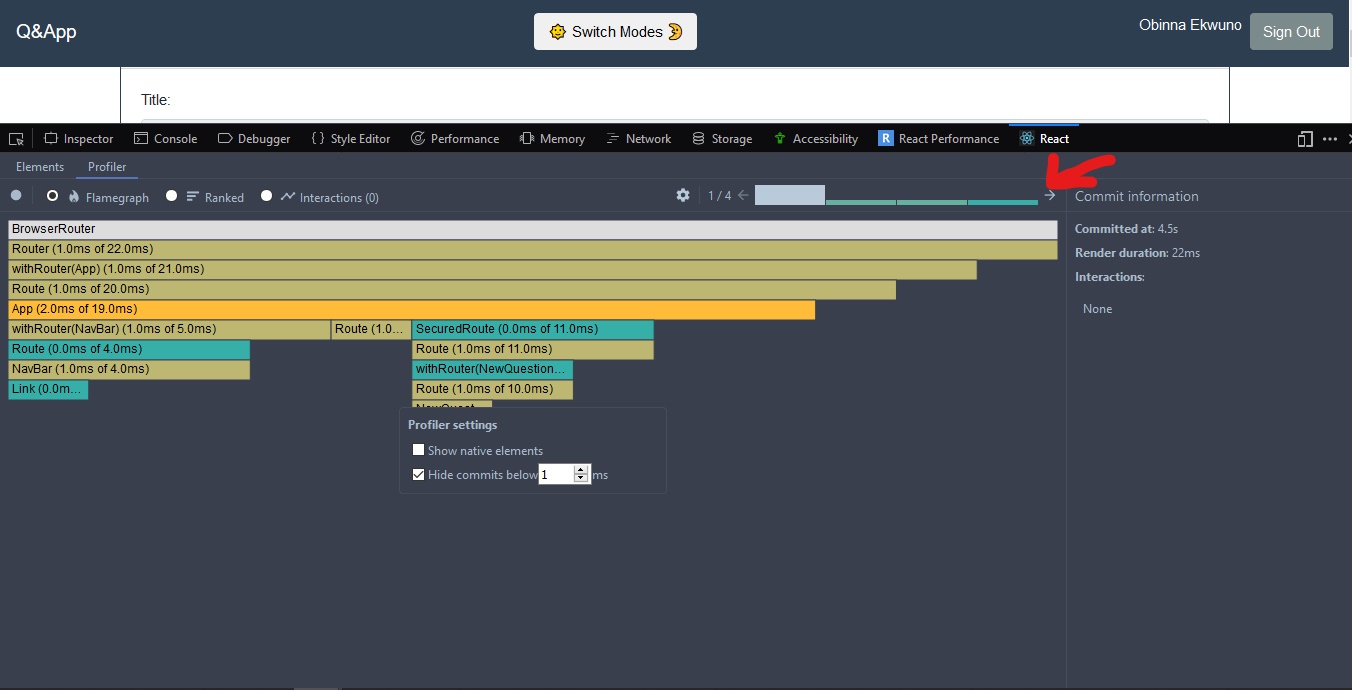 The commit bar chart can be found in the far right, the currently selected commit is colored black, the color and height of each bar corresponds to how long that commit took to render.

Note: When the commits are gray it means they weren’t rendered, this could be as a result of setState never being called in the component.

The ranked chart view of representing performance shows a React component in bar format. It is arranged in descending order, with the components that took the longest to render at the top. A component’s rendering time also includes the time it took to render the children components.

React recently added another experimental API for tracing the cause of an update. “Interactions” traced with this API will also be shown in the profiler. You can also see which interactions were traced for a particular commit from the flame chart and ranked chart views.

The flame chart view represents the state of your application for a particular commit. Each bar in the chart represents a React component. The size and color of the bar represents how long it took to render the component and its children. 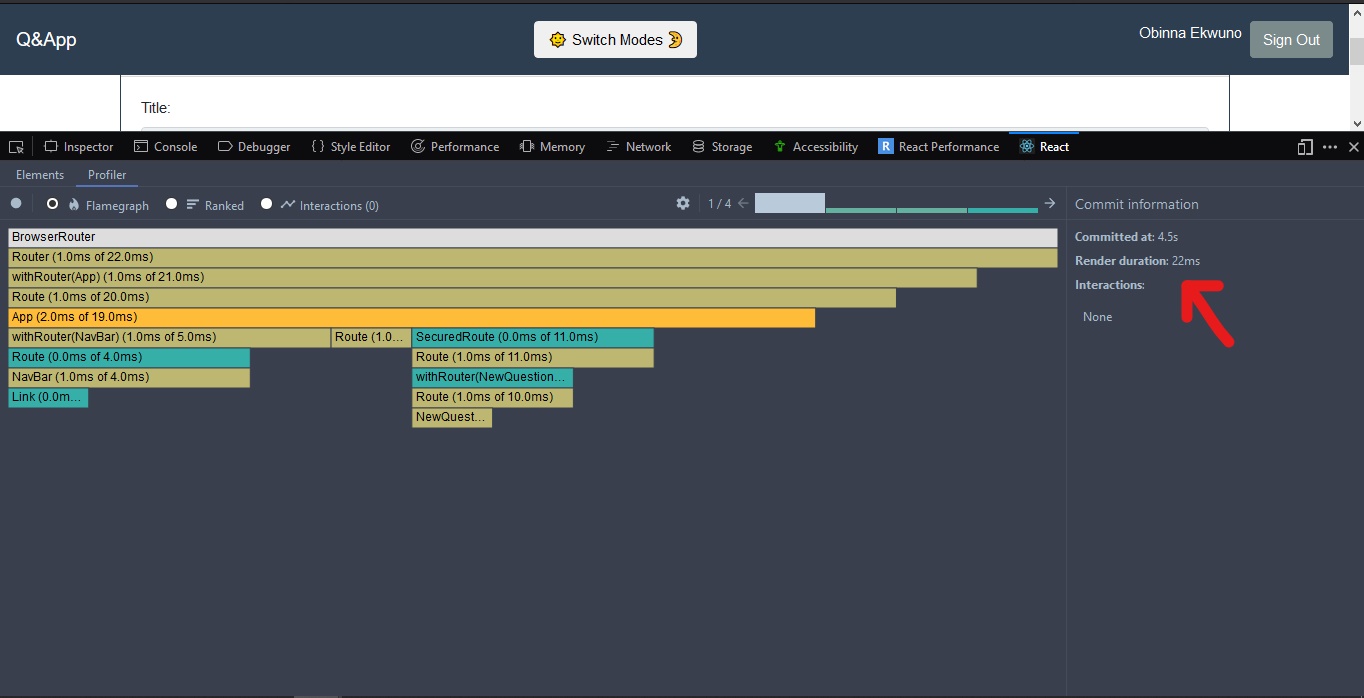 When the following happens, don’t panic. Sometimes your app may have more than one root element, then you may see this error message

What this simply means is that no performance data was recorded for the root you are currently on. In this case, try selecting a different root in that panel to view profiling information for that root

Sometimes a commit may be so fast that performance.now() doesn’t give DevTools any meaningful timing information.

The future of React Profiling

It will be fully compatible with the upcoming time slicing and suspense features. Which are features still being worked on by the good people at React .

We can also run the react profiler in the application by using the following: